Circumstantial Evidence vs Direct Evidence in your Criminal Case 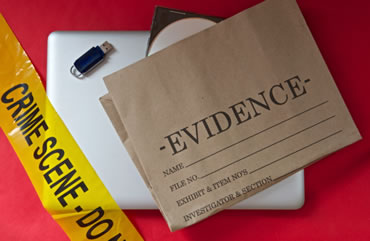 If you’ve been charged with a crime in Nevada, there’s one thing you probably already know: The prosecution’s evidence (NRS 47) or lack thereof will make or break your case.

Evidence in criminal cases comes in two varieties: direct and circumstantial. While each sort has value of its own, the existence of both combined can strengthen the charges against you. A criminal defense lawyer’s goal is to prove all evidence unreliable, leaving the prosecuting lawyer with no case at all.

As its name implies, direct evidence serves to either prove or disprove an allegation in a straightforward manner without forcing the jury to infer a connection. Eyewitness testimony is one example. When a bystander takes the stand to describe what she heard or saw, the jurors have no need to make any inferences. The only thing they will have to decide is whether the witness or is not telling the truth.

In addition to eyewitness testimony, other examples of direct evidence include such things as:

Of course, the fact that evidence is direct does not always mean that it’s accurate. An experienced criminal defense attorney can often cast doubt on its veracity. The strength of eyewitness testimony in particular can rise or fall along with the integrity of the person who presents it. Jurors might easily have more faith in the testimony of a doctor, scientist or crime scene investigator than they would in that of a convict or drug dealer. A good criminal defense attorney will have ways of turning this fact to your advantage.

While direct evidence can be compelling and unambiguous, circumstantial evidence will neither point directly to a fact nor be conclusive in and of itself. Fingerprints are one example. When the prosecution argues that their existence at a murder scene points to the defendant’s guilt, he is asking the jury to make an inference or jump to a conclusion.  Such evidence is often easy to refute. The defense could argue that the mere presence of those fingerprints shows only that the defendant was at that location at some point in time. The visit during which the accused left them behind could easily have taken place days or even weeks before the crime actually took place.

Some common types of circumstantial evidence include:

When presented with circumstantial evidence, the jury must not only make assumptions but also determine whether the facts lead to a reasonable conclusion. Since the defense will counter with evidence of its own, jurors are certain to be hearing another side of the story. It is their responsibility to decide whether the plaintiff’s or the defendant’s version of events is the more credible.

The Strength of Circumstantial Evidence

Although some may find it hard to believe, circumstantial evidence is often compelling. Many prosecutors have won high-profile convictions on circumstantial evidence alone. It will naturally strengthen the prosecution’s case when it derives from a variety of sources, each of which bolsters and corroborates the others.  Nevertheless, the opposite can also be true. In some cases, a single piece of evidence can point to several possible conclusions, each of which is equally logical. There are even instances where two or more pieces of circumstantial evidence contradict each other in almost every respect, with one pointing to the defendant’s guilt and the other to his innocence.  It’s important to remember that if even one piece of circumstantial evidence tends to exonerate the accused, the prosecution will then be forced to disprove its validity. The benefit of the doubt must always go to the defendant.

How the Evidence Affects Your Case

To be legally admissible, the prosecution’s evidence must meet certain qualifying criteria. In addition to ensuring that the means by which it was gathered did not violate your constitutional rights, the criminal lawyers at Weiner Law Group will also insist that it:

Whether the evidence against you should be direct or circumstantial, the experienced defense lawyers at Weiner Law Group will use every means at their disposal to not only refute it but also potentially turn it to your advantage. Many Nevada residents have found themselves in your position. We have successfully argued their cases, and we can help you too. Call today at 702-202-0500 to learn the many ways in which Weiner Law Group will work with you in mounting your defense.