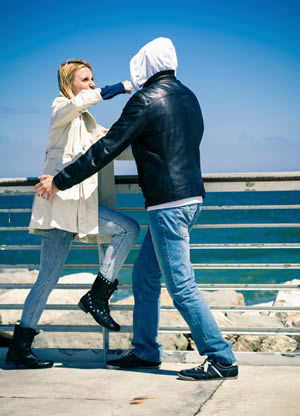 When can I not claim self-defense?

Before discussing when you can claim self-defense in court, let’s go over a few instances where self-defense is not justified. Nevada law states that you must only use as much force as necessary. For example, if someone punches you during a fight and you respond by shooting them to death, this could be considered an unnecessary amount of force and you may lose your ability to claim self-defense.

You also need to be able to justify that you were in immediate danger. For example, if you got in a verbal argument with someone, walked away, and then came back later and assaulted him, you could not claim self-defense successfully. Again, two of the most important factors for justifiable self-defense are that you 1) use only necessary force and 2) were in immediate danger.

When can I claim self-defense?

In situations where you are being attacked by someone or a person is committing a crime against you, self-defense using reasonable force is usually justifiable in court. Crimes that you can legally use self-defense against in Nevada include battery, attempted murder, robbery, and domestic violence. For example, if someone punches you without provocation, and you reactively punch back, you would not be found guilty of battery.

Even force that results in homicide can be defended by self-defense if the same expectations as stated above are met. Furthermore, the danger must be more urgent, to the point where homicide was the only way to save your own life or someone else’s, or prevent grave harm. It also will boost your self-defense case if you can prove that you considered or tried other means of removing yourself from the conflict before the homicide occurred.

In Nevada, if you are in a home or “lodging” and have a legitimate fear of serious harm from a burglar/home invader, deadly force can be justified as self-defense. It’s important to note that there is no expectation that you made an effort to retreat before the use of deadly force, provided that you meet the following criteria: 1) you didn’t start the confrontation, 2) you were not committing a crime, and 3) you were legally at the location where the force was used (you weren’t trespassing, breaking and entering, etc.).

Nevada law also protects you from being found guilty of crimes committed in self-defense of someone else. Again, as long as you were not the starter of the confrontation and had reason to believe serious harm was going to be done to another person, you have the right to stop it by reasonable means.

There can be a lot of gray area when it comes to self-defense laws, the justifications of doing so, and ensuring that your case for it succeeds in court. Getting a strong criminal defense lawyer can help determine the proper defense to use and whether or not self-defense will work in your unique circumstances.