Is It a Crime to Point a Gun at Someone? 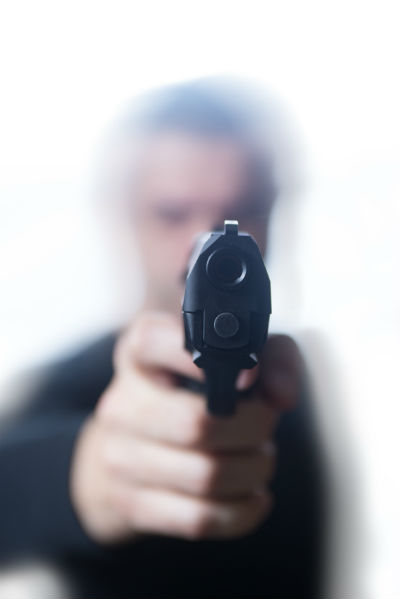 When you live in the state of Nevada, you’d better watch the direction in which you aim your gun. If you point it directly at another human being, you will have committed a crime. Unless you have a good criminal defense lawyer, you could be looking at a hefty fine, a jail sentence or both.

Whether or not you meant to pull the trigger has nothing to do with it. You could still be guilty of a gross misdemeanor, and if the prosecutor can prove that you intended to frighten or harm the other person, you will face charges of assault, battery or even attempted murder.

But I Was Just Kidding Around

Even if it’s only in fun, Nevada law prohibits you from aiming any sort of firearm either at or towards another individual. The law applies equally to every type of pistol, revolver, gun and automatic weapon regardless of whether you were joking or the weapon was loaded or cocked at the time. The truth is that if you are convicted of nothing more than pointing a gun at someone else, you’ve committed a gross misdemeanor.

Although aiming a gun at someone in Nevada can get you arrested, the law separates this particular crime from more violent gun-related offenses. The charge of assault only comes into play when the person at whom you’ve pointed the weapon fears that you’re about to harm him. Furthermore, if you’ve gone beyond simply aiming the gun and actually touched the other person with the weapon or punctured his anatomy with one of its bullets, your crime has escalated to battery. Even worse, if you’ve committed either assault or battery with the intention of killing your victim, Nevada law can charge you with attempted murder.

Defenses Against the Crime of Aiming a Firearm

Since Nevada law will not give you a pass for having aimed a gun at someone either by accident or in fun but with no intention of pulling the trigger, how do you fight these charges? In most cases, it will help if you can prove that:

A competent criminal defense attorney can be of invaluable assistance in helping you fight these charges.

Penalties for the Crime of Aiming a Firearm

If you are convicted of merely aiming a firearm and nothing more, you’ve committed a gross misdemeanor. As a result, you could face up to 364 days behind bars, a fine that could go as high as $2,000, or both. You will not, however, lose your right to possess or own a gun. Unfortunately, if the court finds you guilty of having used your firearm to commit assault, battery or attempted murder, you will have committed a category B felony for which the punishments are correspondingly harsher.

Defense for Your Weapon-Related Crime

Las Vegas-based Weiner Law Group has spent decades successfully defending both men and women against charges of unlawfully brandishing weapons. Our knowledge of Nevada’s criminal justice system and familiarity with the successful defenses against this crime can be of immense value in fighting for your rights. If you are facing weapons-related charges, please call today at 702-202-0500 for a free consultation and let us get an immediate start in working to win your case.