No two criminal trials are ever exactly alike. Despite differences in the details, though, each will advance through seven distinct and predetermined stages. If you are currently involved in similar circumstances, here are the phases that you can expect to occur as your trial progresses.

The task of choosing a jury of your peers will fall to the judge as well as to the attorneys for both plaintiff and defendant. Selection begins with a sizable cluster of possible jury members drawn from a larger pool of currently eligible candidates. The lawyers from either side will question each of these individuals concerning their views on various matters, some of which will be more general while others correlate more closely to the case in question. Each side will do its best to exclude from the panel anyone with biases that could prove detrimental to its case. In the end, the personal prejudices and general life history of each prospective juror will either gain him a seat among the chosen ones or lead to his or her dismissal. 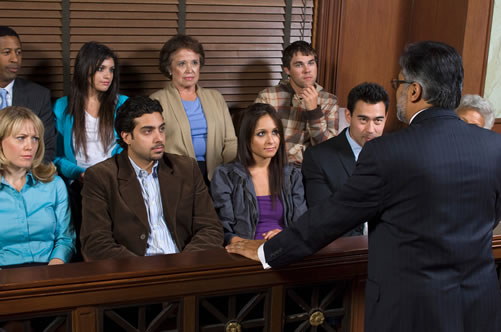 The lawyers for both the prosecution and the defense begin the trial with only one objective: to sway the jurors over to their point of view. This segment of the trial provides the opportunities to do this. The prosecutor speaks first, and since the burden of proof falls upon his shoulders, his opening statement will go into minute detail concerning the facts of the case from the government’s point of view. It will also describe the ways in which he intends to prove them.

The defense attorney will follow with its own interpretation of the situation. At this stage of the trial, there will be no witnesses and no presentation of physical evidence. Neither the prosecution nor the defense has the option of presenting arguments or making reference to facts they can’t confirm or have no intention of proving. Each side must take special care to avoid overstating its case.

In this phase, the prosecution will present its case-in-chief, producing all relevant evidence in an attempt to bolster its allegations and prove its case beyond all reasonable doubt. The defense, in its turn, can choose to present its own detailed case-in-chief or simply elect to challenge the government’s evidence.

Both sides have the option of calling upon experts and eyewitnesses, each of whom will testify under direct examination. Then, through a process of cross-examination, the opposing side will attempt to attack or discredit each witness’s testimony. Finally, the original questioner will have the privilege of performing a redirect during which he will attempt to cast doubts upon points that surfaced during cross-examination.

A competent criminal attorney will take every opportunity to raise objections at points in the trial where indicated. Any failure to do this could result in the loss of the defendant’s legal rights.

After each side has presented its case sufficiently and is done with challenging the other’s evidence, both sides will rest.

During this phase of the trial, both the prosecution and the defense will have the chance to summarize their arguments in a way that shines the most positive light on their individual positions. The prosecution will use this opportunity to convince the jury of the defendant’s guilt based on the weight of the evidence. The defense, on the other hand, will attempt to show that the prosecution has failed in its obligation to do this. This stage provides each side with one last chance to state its case before the jury.

When each side has finished presenting evidence and both have made their closing arguments, either the judge himself or a jury instructor will speak to the jurors directly. The point of this instruction phase is to clarify and define the elements of the crime in question as well as to illustrate ways in which common elements of similar crimes might possibly relate in some way. The instructor will explain exactly what findings would lead them to return a guilty verdict on each potential crime.

Such concepts as reasonable doubt, prejudice and proximate cause will also enter the picture. The judge must ensure that the jury understands not only their meaning but also the differences between them and the ways in which such matters could unfairly influence their final determination.

It is up to the judge to decide which legal standards apply to the case in question according to the testimony and evidence presented by each side. in many cases, however, both prosecution and defense will offer input in the hopes of influencing this decision.

Once they have received their instructions, the jurors retire as a group to discuss the case. During this deliberation process, they will attempt to reach a consensus concerning the defendant’s guilt or innocence. This is the first chance the jury has to discuss the case, and they may need just a few hours to arrive at a consensus. In more complicated cases, however, deliberation can go on for a number of weeks or months.

If the judge should feel that exposure to the outside world could unduly influence the jury’s decision, he may order them to enter sequestration until they are able to agree on a verdict. In most cases, this will limit their access to information from the internet, television and other outside sources.

At any time during the trial, the defendant has the option of entering a plea before the jury has reached a verdict. If the court should choose to accept the plea, it will dismiss the jury at that point.

After the jurors have arrived at a consensus or exhausted all hope of doing so, the foreperson will send word to the judge that it is ready to return its verdict in open court. If the jury is able to agree on some but not all of several counts, it can choose to return a verdict only on those for which it is in accord. In the case of more than one defendant, it can elect to return separate verdicts concerning the guilt or innocence of each. The jury may also have the option of finding the defendant innocent of the original charge but guilty of a lesser offense.

In Nevada as in the majority of states, jurors must come to a unanimous decision concerning a defendant’s guilt or innocence. If it cannot, the resulting hung jury will force the judge to declare a mistrial. The prosecution will then have the option of retrying the defendant, offering a plea bargain or dropping the case altogether.