Should I Take a Lie Detector Test 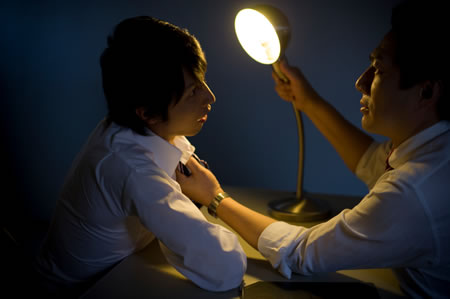 If you’ve ever sat for a police interrogation without a lawyer present, you probably already know the drill. At some point during the procedure, at least one detective may try his best to goad you into taking a polygraph test. This is where things could get sticky and possible criminal charges against you.

In a perfect world, two things would be true: Lie detectors would work with 100 percent accuracy, and law enforcement would consistently use them with pure intentions. Sadly, the world is far from perfect. That’s why, when asked to take a polygraph test, your answer should always be “No.”

The detectives who ask you to take these tests have only one objective in mind: They want to get a confession to a crime. If you do consent to the procedure, you must do so only under the advice of a knowledgeable criminal defense attorney. Never agree to sit for such a test on your own, and never let it take place at the hands of law enforcement while they have you under interrogation.

The Polygraph Machine in a Criminal Investigation

Before it can prosecute a criminal investigation, the state must have sufficient evidence to prove beyond a reasonable doubt that the defendant in question has indeed committed the crime. Forensic data, photographs, eyewitness testimony, video recordings and the like all qualify in this regard.

In most cases, however, the results of a lie detector test will not be admissible at trial. If detectives should ask you to submit to one during a criminal investigation, you can be sure of one thing: They already think you’re guilty and hope that their use of the polygraph ploy will trick you into confessing.

To obtain your agreement to take the test, they may tell you any number of things. They might insist that the law demands it. They could declare that if you refuse, they will have no choice but to arrest you. They may even play “good cop” and present the test as your best and only hope of proving your innocence. Do not fall for these maneuvers.

Always remember one thing: No law requires you to submit to a lie detector test, nor will volunteering to take one do you any favors. Once you’ve agreed to a polygraph test, things can go downhill pretty fast.

That’s because neither the tester nor the detectives in charge of the investigation have an obligation to be honest with you. Even if you make it through with flying colors, they may tell you that you failed in the hopes of tricking you into confessing. This will put you in a very poor position. Since your positive test results would be inadmissible, your lawyers could not use them in your defense.

How Polygraph Tests Are Supposed to Work

A lie detector test operates on the premise that when a person gives a false or deceitful response, his physiological responses will reliably change in a manner that’s certain to give him away. According to the theory, when you are telling a lie, your:

The polygraph machine attempts to pick up on these physiological changes and record them on paper for posterity. If such signs do appear, the examiner will take their emergence as proof that you are lying. At least, that’s the theory behind the process.

What proponents of the polygraph fail to realize is that some dishonest individuals will never respond to a lie detector in ways that one might expect. Practiced liars often have an uncanny ability to put the brakes on any type of unwanted physical reaction. Furthermore, the symptoms produced by such unrelated issues as illness or nervousness can often mimic those a person supposedly exhibits when lying. These facts alone can render the results of any polygraph test inaccurate in either direction, with some erroneously pointing to guilt while others deem an at-fault subject innocent.

If you do make the mistake of submitting to a polygraph test administered by law enforcement, you may find yourself ushered into a room that contains little more than the tester, his equipment and a couple of hard-backed chairs. In most cases, nobody else will be present.

After you have taken a seat, the tester will break the ice by asking you a number of seemingly unrelated questions. They may appear innocuous, but don’t be fooled. Since you are not yet hooked up to the machine, these questions amount to part of the interrogation, and your answers will be admissible.

Once he has lulled you into a false sense of complacency, the tester will attach four, five or six sensors from the machine to various parts of your body and flip the switch to the “on” position. He will then ask you a few more questions of a type to which every sentient person would already know the answers. As you state with certainty the time of day or the color of the sky, the sensors record your unstressed bodily reactions on a moving strip of paper.

These initial questions are meant to establish a baseline of the way in which your body responds when you are obviously telling the truth. Once the hardball questions begin, any deviation from this reference point will supposedly signal a lie.

Once testers have their subjects hooked to the machine, they usually employ one or more of three traditional questioning methods to get them to spill the beans. These include:

As you answer each of the operator’s questions, he will shift his gaze between you and the moving needles as they graph your responses. The paper record allows him to analyze your test results in real time and after you’ve left the room.

After he has turned off the polygraph machine, don’t be surprised if the examiner continues asking questions. He is doing this in the hopes that once the sensors have ceased to record your responses, you will let down your guard and incriminate yourself by accident. It is vital to remain alert. Always remember that even though the polygraph itself cannot serve as evidence in a court of law, the questions that you answer before and after taking it will always be fair game.

Proponents of the test will claim that when it comes to detecting a liar, the polygraph succeeds with a high degree of accuracy. Nevertheless, no one has ever said that it is perfect. Each subject will exhibit his or her own unique set of physical responses. In addition, the reading of these tests is highly subjective and open to interpretation.

Never submit to an interrogation or agree to take a polygraph test without first speaking to a qualified criminal defense attorney. If you are facing criminal investigation and honestly believe that taking a polygraph would help to prove your innocence, don’t let law enforcement get involved. Instead, call the criminal defense attorneys at Weiner Law Group. Call us today for a free consultation at 702-202-0500 or fill out our contact form.