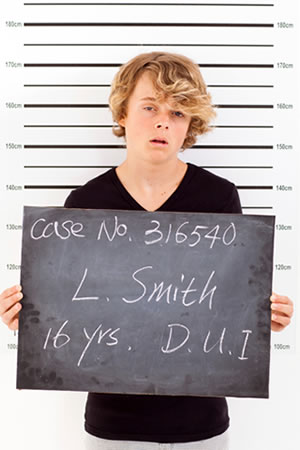 In the state of Nevada, an adult can legally drive with a blood alcohol content of up to 0.08 percent. However, for anyone under the age of 21, driving under the influence (NRS 484C) is entirely different story, one for which the ending could include a school suspension, the loss of a driver’s license or even a criminal prosecution.

Although Nevada considers it a crime for anyone meeting the legal standard of intoxication to operate a motor vehicle on publicly accessible land, the vital question of how high blood alcohol content is too high depends entirely on a person’s age. As long as he or she is not actually driving under the influence (BAC over 0.08), an adult with a BAC of 0.08 percent or lower can legally get behind the wheel. For those who are under 21, however, Nevada adheres to the policy of zero tolerance. That means that with these individuals, a BAC of 0.02 percent or more alone will do the trick, regardless of whether that level is or is not adversely influencing their ability to drive.

Regardless of a person’s age, the penalties for DUI will vary in severity depending on the existence and number of any prior convictions. While a first arrest for DUI will always constitute a misdemeanor DUI, any subsequent arrest for the same charge within seven years automatically equates to a felony DUI. When considering the penalties for underage DUI, the courts will also consider whether the person facing these charges is over or under the age of 18.

In contrast to older children between the ages of 18 and 20, those aged 18 or younger will likely fight charges of misdemeanor DUI in juvenile court. However, minors who face charges of felony DUI in Nevada might find themselves in far more serious difficulties. If the judge should choose to certify them as adults, they will find themselves fighting the charges in criminal court.

Those charged with DUI under the age of 21 in Nevada will for the most part face the same penalties as an adult would. The standard punishments include:

The state will also require those convicted of underage DUI to submit to a substance abuse evaluation and surrender their driver’s licenses for a minimum of 90 days. They may also face a sentence of between two days and six months in juvenile hall or jail, but most judges will normally either suspend this sentence or convert it to an equivalent period of community service.

With each subsequent conviction for DUI, the penalties become increasingly harsh, and any DUI that results in serious injury or death of another person counts as an automatic felony with heavy fines and mandatory prison time.

How a DUI Conviction Affects Your Future

Your record for conviction of underage DUI will remain unsealed for a period of seven years. This can affect your future in many ways. Your current school may choose to suspend or even expel you. A college or university to which you had hoped to apply could automatically disqualify you from consideration, and any job you attempt to acquire could very likely choose to dismiss your application out of hand.

Your insurance coverage can also suffer. The majority of companies will raise your monthly premiums by $100 or sometimes more. Others will refuse to renew your policy or terminate it altogether.

In short, the repercussions from what seemed such a simple mistake at the time will continue to affect your life for at least seven years. That’s why it’s vital for anyone facing charges of DUI to do everything they can to get those charges dropped or reduced.

How a Criminal Defense Attorney Can Help

Charges of DUI are far too serious to fight without the help of private counsel. An experienced DUI lawyer can often convince the court to dismiss the case entirely, but if that should prove impossible, a reduction of the DUI charge to one of reckless driving can be of immeasurable help. Such a conviction will remain unsealed on your criminal record for two years instead of seven with far less of an associated stigma. Your future possibilities can rise or fall in conjunction with your lawyer’s success.

Don’t let a youthful indiscretion wreak havoc with your chances for success in life. Call the criminal defense attorneys at Weiner Law Group today at 702-202-0500 or fill out our contact form to speak to an attorney.