What Are the Causes of a Mistrial? 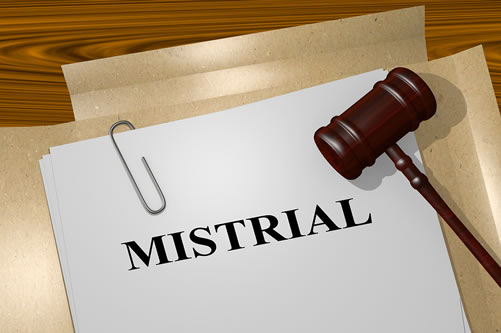 When accused Las Vegas underwear thief Joey Kadmiri first appeared at jury trial in July of 2014, he expected a fairly swift conclusion in the form of a verdict. His brandishing of a gun while entering the “Thunder from Down Under” dressing room to steal the male strippers’ thong undergarments had gotten him into this mess. It had also captured the imagination of local news personalities who broadcast updates on the case at every opportunity. In the end, the jurors’ off-the-record discussion of this telecast information led to Kadmiri’s mistrial and greatly delayed the eventual resolution of his case.

The term of mistrial applies to any court case that reaches an unexpected or insoluble end without returning a verdict. While any number of factors can claim responsibility, most mistrials revolve around such fundamental procedural errors as:

A defense lawyer may request a mistrial, but only the judge can make that final determination. In view of the heavy investment involved in bringing a case to court and presenting it to the jury, some hesitate to do this unless circumstances make it entirely unavoidable. When such situations do arise, most revolve around misconduct on the part of either the jury or the prosecution.

In the interest of conducting trials that are as fair as they are impartial, the judicial system has designed a set of rules by which jurors in a court trial must abide. Any action that might constitute a violation of these regulations could lead to a mistrial. Some examples of this type of misconduct include the juror who:

These rules have but one intent: to ensure that jurors are influenced by nothing other than the evidence presented to them in the courtroom. However, given the wide dissemination of data in today’s world, jurors often find themselves not only looking up information deliberately but also encountering it inadvertently. Either way, this could serve as grounds for a mistrial.

It is the job of prosecutors to oversee investigations, build a case and present evidence in an attempt to convince the jury of a defendant’s guilt. The law expects them to do this in a professional manner while obeying all procedural laws and regulations as they relate to the trial itself. Any behavior that goes against the code of ethics could amount to prosecutorial misconduct.

Common forms of this include:

At times, issues of false arrest or forced confession that come to light after the trial is underway can tip the scales toward mistrial as well.

The Fifth Amendment’s so-called double jeopardy clause exists to ensure that no person need stand trial more than once for the same offense. In other words, jeopardy only attaches for as long as it takes the prosecution to make its case, the defense to refute the allegations and the jury to reach a verdict of guilty or innocent. At this point, the trial comes to a normal conclusion and the defendant is no longer in jeopardy.

In a mistrial, however, the trial never reaches a normal conclusion. Either it comes to a halt before the jury has had a chance to convene or it ends inconclusively when the jurors find themselves unable to reach a unanimous verdict. Since the trial did not terminate conventionally, jeopardy remains attached and the prosecution still has the option of retrying the case. However, this will normally happen only if:

Although this sort of situation can leave the defendant in a precarious position, the concept of double jeopardy may protect him or her from having to endure another court case if the mistrial resulted from bad faith on the part of the judge or the prosecutor. This is particularly true if that misconduct consisted of attempts to encourage the defendant or his attorney to request a mistrial of their own accord.

In the end, the aftermath of a mistrial will vary in accordance with a number of different factors, all of which the judge may or may not call into play. Following his own invalidated trial, underwear thief Joey Kadmiri never did hear a jury verdict. In November of 2015, he avoided a second go-round by accepting a plea deal. He is now serving a prison sentence of from 10 to 25 years.