What Does Being an Accessory to a Crime Mean? 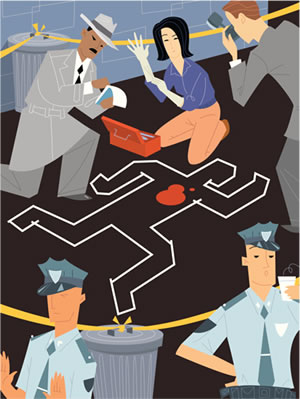 If you have engaged in protecting an alleged criminal or assisted in hiding the evidence of his crime, you could soon find yourself facing legal charges of your own. The fact that you played no active role in the crime’s commission does not absolve you of guilt. The state of Nevada may still see fit to charge you as an accessory to a crime (NRS 195.030).

Anything that one might do to help a criminal suspect after the fact will normally constitute the behavior of an accessory. This includes such actions as:

The state of Nevada could also pose additional charges if anyone facing charges of accessory to a crime should provide false evidence (NRS 199.210), resist arrest or attempt to obstruct a police officer.

Acting as Accessory to a Crime Versus Aiding and Abetting

The moment at which a person actually becomes involved in a crime will determine whether he acted as an accessory or aided and abetted in its commission. Let’s assume that a friend of yours has just robbed a liquor store, fleeing with a bagful of money. He subsequently bumps into you on the street, tells you what he has done and asks you to stash the cash for him. You agree to do so, and because you helped him out, you’ve just acted as an accessory.

Assume, on the other hand, that as you stand in the vodka aisle, you notice that the checkout clerk has failed to close the register. When your friend enters, you point to the open cash drawer and agree to stand watch while he helps himself. You have personally gone nowhere near the register, but because you aided and abetted your friend in committing the robbery, you are more than a mere accessory in this case.

When a Victim Dies

The difference between acting as an accessory or aiding and abetting always comes down to timing, and the moment at which a murder victim breathes his last breath can serve as a clear determinant. If you help a killer move a dead body, you become an accessory, but if you assist in cleaning the room while the victim is still alive, you will face charges of having aided and abetted in the murder.

The law also distinguishes between accessories to a crime and those who have conspired to commit one. While conspirators make a pact or agreement to engage in an illegal activity, an accessory to that operation gets involved only after it has already taken place. Although an accessory might enlist the help of others in his efforts, this would not constitute conspiracy under Nevada law.

When You Cannot Be Charged

Regardless of any attempts they might make to help, members of a suspect’s immediate family cannot be charged as accessories. Those in this position include the alleged perpetrator’s:

Nevertheless, the same exemption does not apply to close friends or to any other member of the suspect’s family circle.

Penalties for Conviction of Accessory to a Crime

In the state of Nevada, the punishment for conviction of accessory charges will vary according to the type of crime in question, as follows:

Any accessory to a crime can also face charges for related offenses. These include:

Common defenses for accessory to a crime include having been:

If you are facing accessory charges, the criminal defense attorneys at Weiner Law Group may be able to help you get them reduced or even dropped entirely. Call today at 702-202-0500 or fill out our contact form for a consultation and learn what we can do for you.